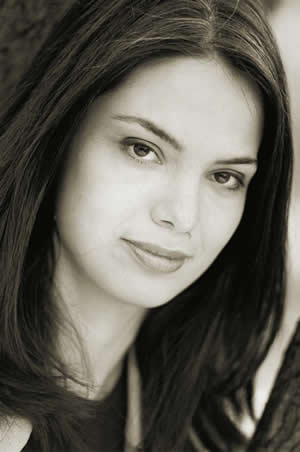 A native Bulgarian Bojidara Kouzmanova graduated from the University of Music and fine Arts in Vienna where she studied with Prof. Gunter Pichler (Alban Berg Quartet). In her career as a concert violinist she has played as a soloist with all the Bulgarian Orchestras, Prague Radio Symphony, New Symphonic Orchestra Basel (Switzerland), Recreation Orchestra Graz, Kottmann Soloists, Bach Soloists in Vienna and many others. Her concert and teaching engagements brought her to many countries in Europe, USA, Africa, Asia and Australia. She has recorded 12 CDs in the past years, many of which with instruments such as Stradivarius “Da Vinci” (1725) and Stradivarius “ Red Diamond” (1732). Her last CD came out in the spring with 4 different violins and pieces from Brahms, Franck, Ysaye, Bach and Korngold. She plays a violin made by Testore (1740) and her own made by Matthieu Devuyst (2008).

The critics say for Miss Kouzmanova:

“Her performance was very clean, expressive, full of tension and played with such an easiness and understanding. But most of all with heart.”
Frankfurter Allgemeine Zeitung, Germany

“the public was overwhelmed by the emotional strength of the sound and the phrasing of Kouzmanova.”
Argauer Zeitung, Switzerland

“She doesn’t just play the music, she makes you feel the inner strength and energy of it on your own. Her precise playing is reached with charm and elegance.”
Basellandschaftliche Zeitung, Switzerland

She studied at the Ljubomir Pipkov Music High School in Sofia and at the University of Music and Performing Arts, Vienna. She participated in violin courses with Prof. Munteanu (Romania) in 1994, Vanja Milanova (Bulgaria) and Michael Barta (USA), from 1995 to 199 with José Luis Garcia (Spain), with Alois Kottmann (Germany) in 1999 and 2000, and with Vladimir Spivakov (Russia) in 2000.
Performances

Several composers (R. Dimitrov, M. Kerer, P. Liakakis, J. Purgina, P. Richter, T. Wally among others) dedicated violin compositions to her, some of which she has premiered.[1][2]

Her first CD recording was in 1996 with Plovdiv Philharmonic Orchestra under the baton of Nayden Todorov, playing the Bruch Violin concerto No. 1 and Mendelssohn Violin concerto. She has also recorded the violin concerti by Karen De Pastel, Sergei Prokofiev and Erich Wolfgang Korngold and has done several CDs with works for violin and piano, recorded with the violin Stradivarius “Da Vinci” (1725) on loan to her from Professor Dietmar Machold.

Miss Kouzmanova has played with different famous instruments, most of them given to her by Machold. She had the opportunity to play the Stradivarius “Red Diamond” – 1732, “Da Vinci” – 1725, Stradivarius 1717, Stradivarius “Ex Nachez” 1716, Stradivarius “Reynier” 1681, Pietro Guarneri 1735, Guarneri del Gesu 1741 and several new made violins including a Gerlinde Reutterer 2004, Greiner. Since 2008 she plays her own instrument made by Matthieu Devuyst.

To learn more about this artist, please visit: www.bojidarakouzmanova.com.