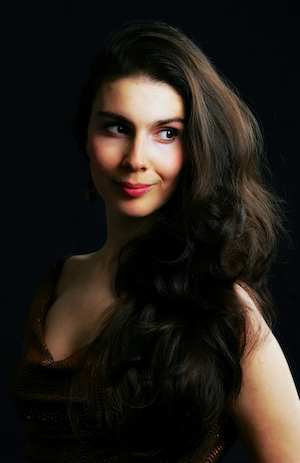 In 2017 she was awarded the first prize in three international  competitions:

Born in France, Laetitia Grimaldi spent her childhood in Lisbon and London. After beginning her vocal studies with Teresa Berganza, she continued her education with Lorraine Nubar in New York City, first at the Manhattan School of Music, followed by a Masters degree from the Juilliard School.

She has received mentorship with some of the world’s leading artists, including Sir Thomas Allen, Dame Emma Kirkby, Alfred Brendel, Ileana Cotrubas, François le Roux and Dalton Baldwin. In 2016, Ms Grimaldi changed to soprano under the mentorship of the German baritone, Matthias Goerne.

She has appeared in many opera productions internationally, performing the role of Nancy in Albert Herring in Tampa, Florida, Dorothée in Massenet’s Cendrillon in Belgium, Lucilla in La Scala di Seta in New York, the American premiere of Sir Peter Maxwell Davies’ Kommilitonen in New York. She made her debut at the Verbier Festival in Switzerland with the role of Marcelina in Le Nozze di Figaro. She sang the title role of Rameau’s Les Fêtes de l’Hymen et de l’Amour at the Kennedy Center of Washington DC. Once again, she was invited to the Verbier Festival to perform the role of Musetta in Puccini’s La Bohème. Recently she sang the title role of Proserpina in the modern revival of J.Jommelli’s opera Cerere Placata.

Recent performances include extensive recital tours in China, Australia, New Zealand, Mexico, South Africa, Canada, the USA and throughout Europe as well as performances with orchestras in Montreal, Brasilia, Cape Town and the Château de Versailles.

To learn more about this artist, please visit: www.laetitiagrimaldi.com